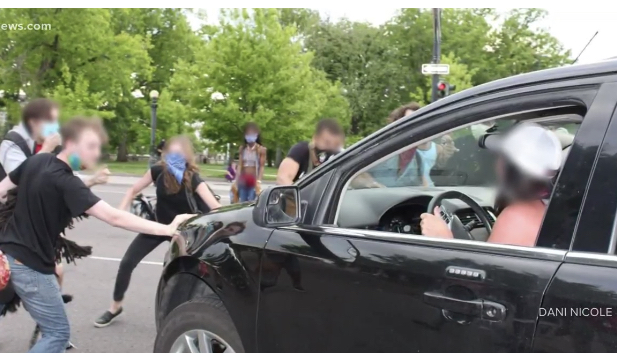 Recently there has been a rash of protesters who storm into the street and threaten drivers, vandalize their cars and sometimes even pull drivers out and attack them. Sometimes drivers are even shot at as they try to leave. It seems like what happened to Reginald Denny in 1992 is what more and more of these protesters have in mind: pulling an unsuspecting driver out of their car and trying to beat them to death. The protesters are outraged if anyone gets away, especially if the driver nudges their way through the line of protesters. In this episode I share some thoughts on how to survive such an encounter.

Ethical Preparedness has a YouTube video on the same subject here, and it has some great advice.

Here is the Reginald Denny event in 1992. It is difficult, but you should watch it so that you know what could possibly happen to you if you are driving and the road is suddenly blocked by protesters.

Here are videos of some other unfortunate drivers who were recently shot by protesters in the road when the driver tried to get away: Danny Pruitt in Alamosa, Colorado, and an unnamed driver in his 60’s in Provo, Utah. The gunmen in both cases were charged with attempted murder but were let out after having to pay very low bail.

(By the way, Mr. Pruitt’s family has set up a Go Fund Me at this link here not only to pay his medical expenses but also to support his young daughter. I encourage you to donate.)

Here is the news story of another Provo driver who was shot while trying to get away from a mob of protesters in the street. Protesters in Provo seem very angry at anyone who wants to drive away.

Here are links to some survival items I suggest you consider buying:

First aid kit for your car

Here is a link to some great pepper spray, available on Amazon. (Only buy this if it is legal in your area.)

Here is a link to a great self-defense item (actually it is called a “multi-tool hatchet”) sold on Amazon.

And while you’re at it, consider shopping at Amazon’s Warehouse Deals — up to 70% off! — from this link here. Shopping at Amazon through the Survival In Motion Amazon store helps defray production costs.